Our 2018 Project Playground Build will be taking place on Saturday, May 19th at The Boys & Girls Club of Bellport, 471 Atlantic Avenue, Bellport, NY 11713.  On Friday, the day before the build, we will need volunteers between 7-4 p.m. to help prepare for the build by coring holes in the ground to accommodate the playground structure.  On the day of the build, we will need between 50-70 volunteers for the build.  Volunteers can sign up for the following time slots: 8-12 p.m., 12-3 p.m. and 3-6 p.m.  It is not necessary that you bring the following, but if you could it would be great appreciated — tools, ratchets, hammers, screwdrivers, shovels, rakes, and wheelbarrows.  Food and drinks will be served.  For safety reasons, no children under 18 are allowed to participate.

What to learn more about this project? Please review our press release Project Playground 2018 Press Release

Information About Our 2016 Project Playground Build – 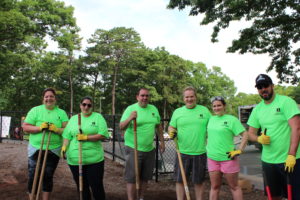 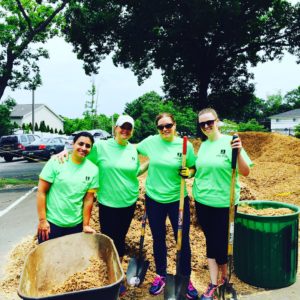 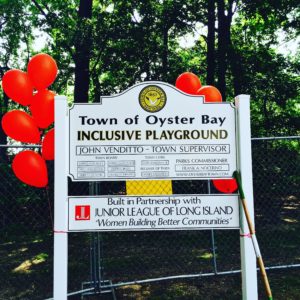 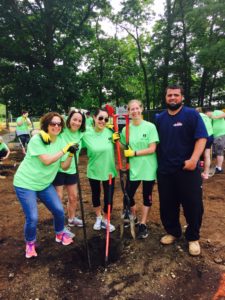 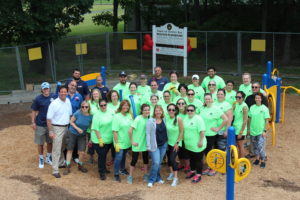 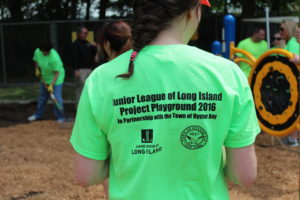 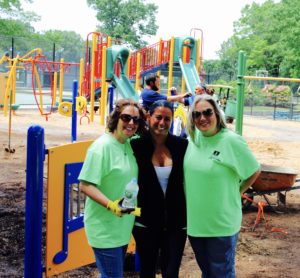 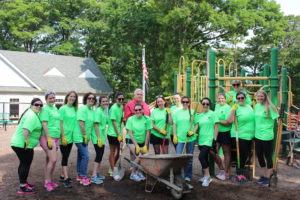 Volunteers from the Junior League of Long Island help prepare Haypath Park in Old Bethpage on Saturday, June. 11, 2016. New playground equipment that’s accessible to kids with disabilities was installed at the park. (Credit: James Carbone)
A new “inclusive” playground that will allow kids with disabilities to play with their friends and siblings is to open Tuesday in Old Bethpage.

The playground at Haypath Park is the first of its kind in Oyster Bay and one of the only ones on Long Island, said Oyster Bay Town board member Rebecca Alesia, who was involved in the playground’s planning.

On Saturday, more than 30 volunteers, mostly Junior League of Long Island members, assembled and installed the new equipment specially designed for children with disabilities. Town employees cemented it into place.

“It’s all sensory-based,” town director of operations Andy Rothstein said of the apparatus.

Children can push buttons to hear musical sounds, speak through a “bullhorn” to communicate across the playground, turn wheels and strum thin bars. The equipment, much of which is metal covered in vinyl, is low enough to accommodate children in wheelchairs.

Near the specialized apparatus is the park’s old playground, including two swing sets that were relocated a few dozen feet away to make way for the new equipment.

Plainview resident Rob Pickus, 47, said the mix of items will allow his disabled son, Noah, 11, to play with his sister and friends.

“He’ll be able to interact a little bit easier and do more with other kids than at a typical park,” Pickus said.

Noah was born with a congenital CMV infection, which led to cerebral palsy on the right side of his body, a cognitive disability and hearing loss, Pickus said.

He can use some typical park items, but not others, and with swings, for example, he has difficulty pumping back and forth, Pickus said.

Pickus sometimes takes Noah a 20-minute drive away to a special-needs playground at Eisenhower Park in East Meadow. But the new, closer playground at Haypath will allow Noah to play with more kids that he knows, he said.

The nonprofit Junior League paid $30,000 for the Haypath equipment, said group president Joel Blainey. Every two years, the organization installs playground equipment on Long Island. Past projects were at nonprofits or schools. This is the first partnership with a town government, Blainey said. The town will maintain the playground.

Rothstein said the collaboration “could be a template” for future public-private projects.

Alesia said the playground is serving a “real community-driven need” in an area known for schools with extensive special-needs services.

“It’s really minimal impact on the existing park, but we’re just adding something wonderful,” she said.

The project is implemented over a two year period. The first year focuses on planning and coordinating, followed by the actual construction of the playground. During the planning phase, style and size of the equipment are determined and necessary permits obtained. The first year also involves establishing community support for the building. During the second year of the project, the playground is built, equipment is ordered, a date finalized, and the project is well under way.